Alejandro Cartagena is a fine art photographer based in Monterrey, Mexico. His new series, Carpoolers, has generated exciting feedback and reviews in the fine art world, including a recent article on the New York Times website. Alejandro is represented by the Kopeikin Gallery in Los Angeles and Patricia Conde in Mexico City. 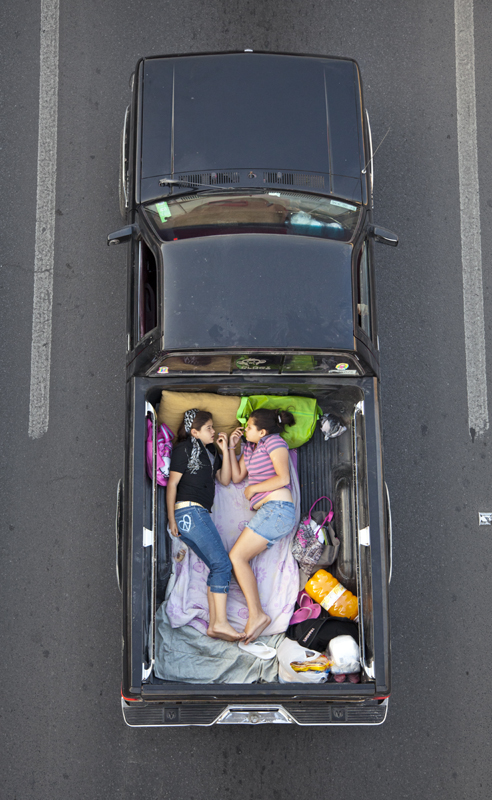 You have a series called Americans, and a reference to the American Dream. What are you trying to convey with this series?

Living in border culture makes you aware of certain ideals and preconceptions on both sides.  I want to tell stories that convey some of those ideas, which break the mold of what is expected of the Mexican side, and so what I found is a group of people that have been practicing biculturalization. Their parents want them to have the benefits of being a U.S. citizen, but at the same time have the family and cultural ties of a Mexican citizen.

So what happens is that they have their babies legally in the U.S., but they never live in the U.S. —neither the parents nor the children. Some end up studying or working in the U.S., but cross the border everyday back into Mexico to live. That is the exception to what is expected from the eager Latin-American trying to cross. You have people who live in the U.S. legally, but after interviewing them, you find most dislike the lifestyle there. Still, they embrace the opportunities it gives them.  Others, by contrast, don´t even consider these benefits, and have not studied or lived in the U.S. 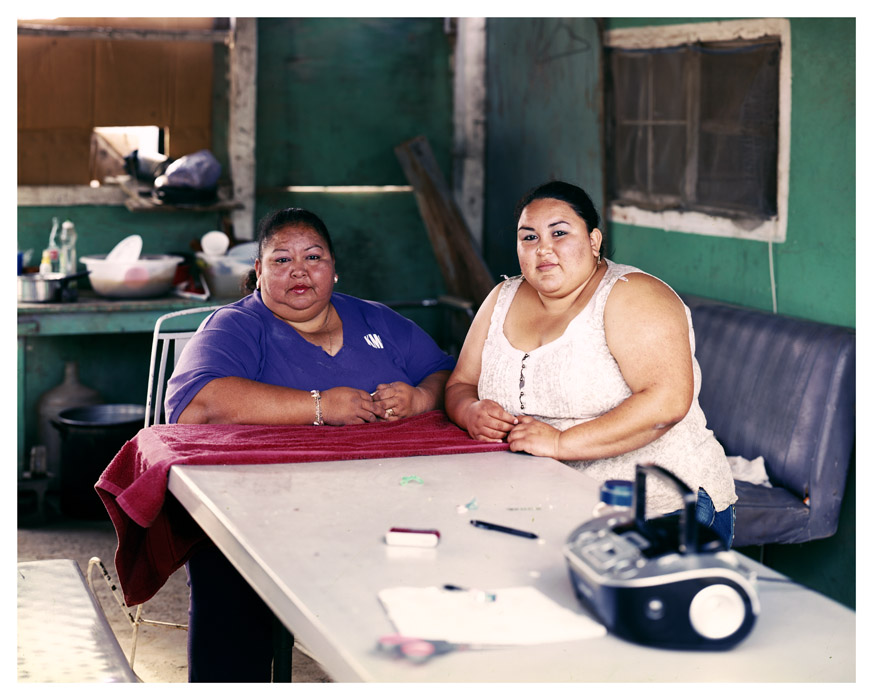 For this series you used all color. How do you decide between shooting color or black and white?

It´s an aesthetic thing.  I make the decision of which to use depending on if I think one or the other would help the subject matter.

What cameras and lenses are you currently using for your fine art work?

A Sinar 4×5 with Fujinon and Schneider lenses, a Mamiya RB67 with the  90mm and the Canon Mark II with L lenses.

Are all of your series exhibited with galleries or do some just reside online?

Some are just online. I do a lot of personal work and I try to at least find closure by posting it online. It´s difficult sometimes to have the work in the “market,” and I don´t really want to produce for that, and so the website makes me feel it has become something, even if it is just virtual. I need closure, because that’s what has allowed me to advance in my thinking and production. 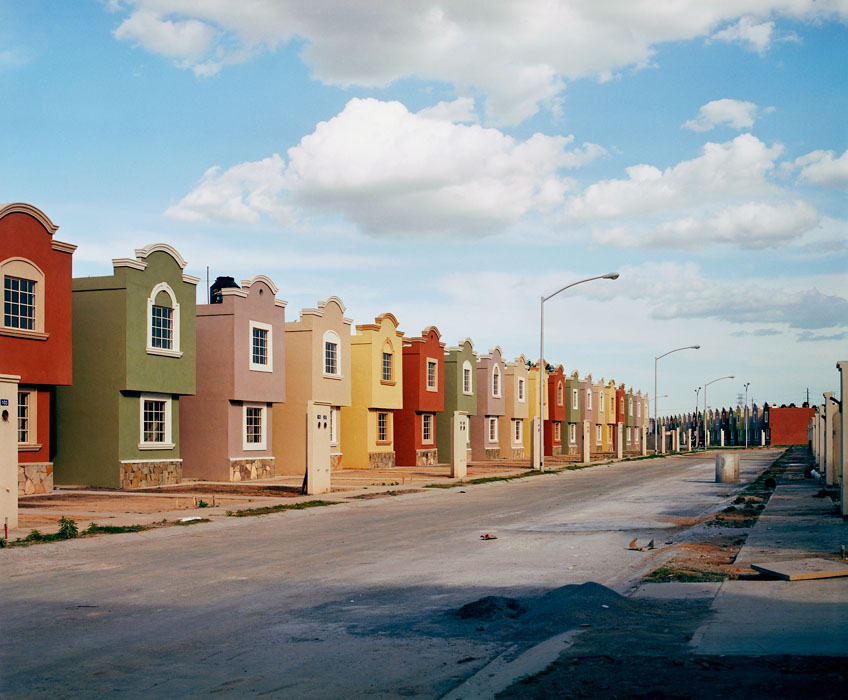 How did you come up with the idea for Car Poolers?

It wasn´t so much about coming up with it. It was more a realization of how the images would or would not be a part of a larger story I´ve been pursuing for the past seven years.  Specifically, I’ve been looking at the idea of the city — urban growth and how it affects people in everyday life. When I saw the images, I really liked them visually, but it was how they connected to my previous project  Suburbia Mexicana that made me pursue it.

Since 2006 I had been photographing the houses where many of these workers live. Mainly new suburbs in the outskirts of Monterrey. The houses are really tiny and badly built, yet people sometimes carry a mortgage of up to thirty years. When I shot those images I never asked to be let inside. I felt it would be intrusive and make them feel uncomfortable if they realized I was singling them out because of what they had bought. So when I saw them traveling this way it was a perfect representation of their lifestyles but in a public space doing their jobs in order to maintain that dream of homeownership. 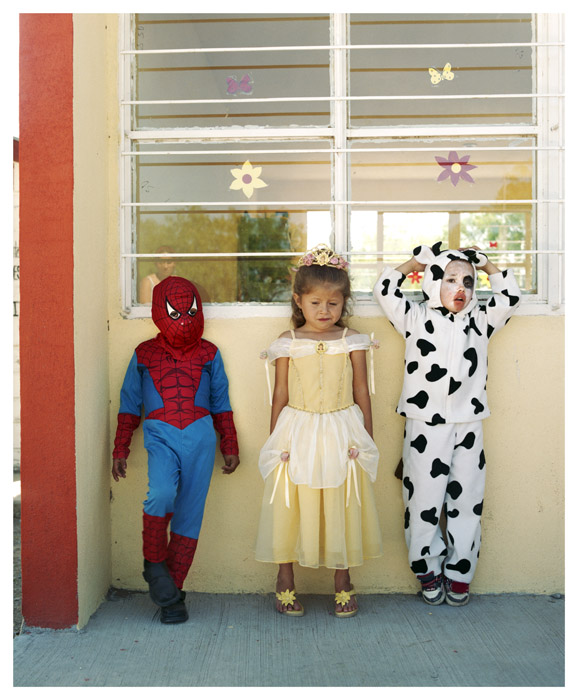 What did you discover about this series?

That it’s difficult to do a series of images that are so simple in composition and framing. Also, I do not know if they are portraits or street photographs.  Images of people are easier to digest and to have a connection with. I am very lucky!

What have been the highlights of the journey in creating and showing Car Poolers, and have you been surprised by the attention and success it achieved?

I never ever expected the work to have “something”.  I felt the series would be liked, but not as much as how it has been received, reviewed, shown and posted. I guess the highlight is having it become part of permanent collections like MFAH, SFMOMA, The Harry Ransom Center in UT. I also love that they inspire awe and hate at the same time! 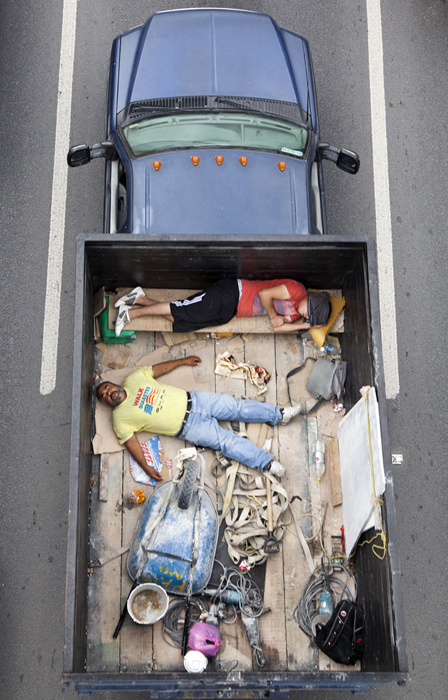 Your current, in progress, series is called Urban Transportation. What is different about this than the “Car Poolers”?

Urban Transportation is almost a baby of Car Poolers. I shot it while shooting the series. I wanted to get a sense of how we can represent a city by its transportation methods, especially automobiles. So basically it is a  very large collection of different types of cars, trucks, and some motorbikes in Monterrey.

Your series Landscape as Bureaucracy is about the problems of getting a mortgage in Mexico and the moving process.  What inspired you to create this work?

Like in Car Poolers, it’s part of the big story of Mexican cities and homeownership in 21st century Latin America, and how people dream of it, deal with it and eventually give up on it.  Hopefully, by 2015, I will bring out a book which contains all these works. 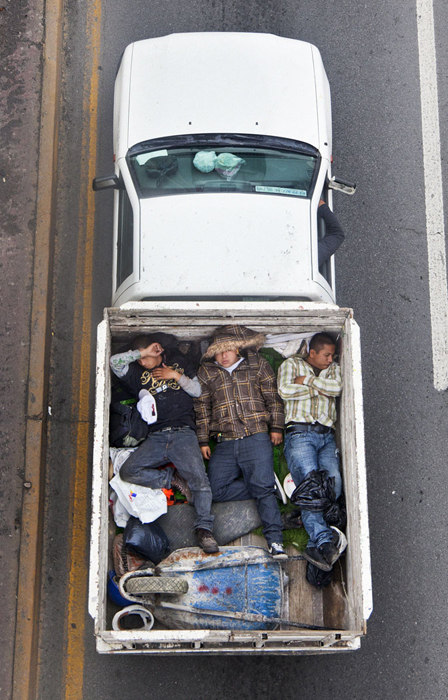 What was the idea and inspiration for your series Suburbia – Mexicana – Fragmented Cities?

Fragmented Cities was the start of the Suburbia Mexicana project and the initial shift in my work towards doing long-term projects. Right before I started doing these pictures, I was scanning the whole archive of a Mexican photographer named Eugenio Espino Barros, for the photography center. We were going to produce a book and an exhibition. I got to scan around 1000 negatives and print over 200 of his images.

He was a great large format photographer, a camera inventor and a documenter of Monterrey. Looking at those images really moved me to look back at those spaces and the cityscapes he photographed. I wasn´t looking to re-photograph the exact same spaces. For me it had more to do with how Monterrey looked today. So after a couple of months, I had some good landscapes filled with little houses, and started sharing them with friends and peers.

One person who saw the work was Wendy Watriss. She pushed me to explore the idea of new topographics, and how I would contextualize that in Monterrey. So then I really got into American photography and the ideas surrounding the visual documentation of suburban sprawl. The idea at the start was to document as many of these new developments I could find. Eventually it seemed I was just repeating the idea of growth and so I stopped, and went into a “crisis.” Yet I emerged with seven years of work that looks at the causes and effects of Mexican suburbia,  — including the Car Poolers project. 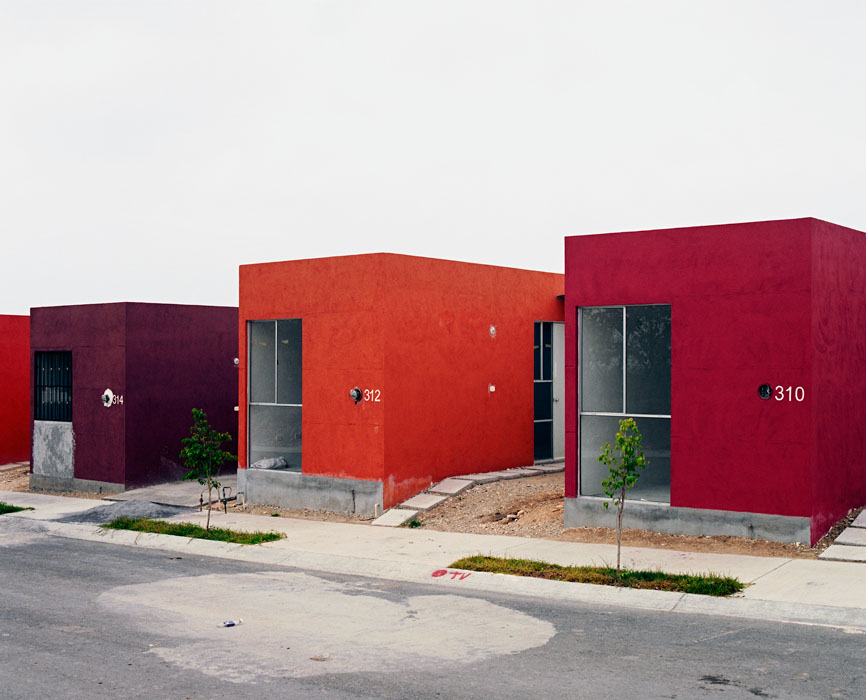 You have spoken about the violence in your hometown, Monterrey, which has become worse lately. When did this become apparent?

It became apparent in 2008 or 2009, when there were more and more killings and public displays of them. For me it got really close when a student was murdered going home after my class by an unknown gunman who was shooting at someone in the street. Then last year my parents suffered extortions from one of the cartels and had to shut down our family business. So it built up slowly at first in 2010, and has continued until now.

What are you teaching, and do you enjoy it?

I mostly teach an editing workshop in several photo schools in Mexico and Guatemala. I really enjoy teaching how good editing improves your work, and how photography has expanded the notion of storytelling. 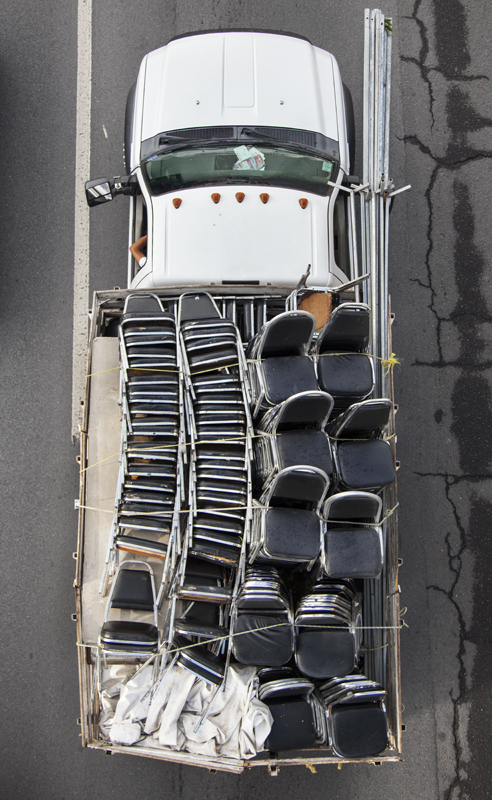 Would you describe your style of fine art photography as photojournalistic fine art?

I am pushing myself more and more towards just being an artist that uses photography. Many of my new projects made me rethink what I am doing and have done. I embrace the limitations of photography, and want to work around them and create beautiful, engaging work that makes me happy.

How did the your current relationships come about with your galleries in Los Angeles, Mexico, and Toronto?

All of them happened by chance. I stopped looking for a gallery after two to three years of actively trying to get one. Then I just cooled off and realized that the work comes first, and that if I can´t sell it, I need to find another way to earn money to survive and create more work. So I started participating in contests and applying for grants and got lucky. I did all this while having a full time job at a photography center. This really helped me become aware of what is expected from artists as far as production quality and proposal writing goes, and how you can still survive while being an emerging artist. 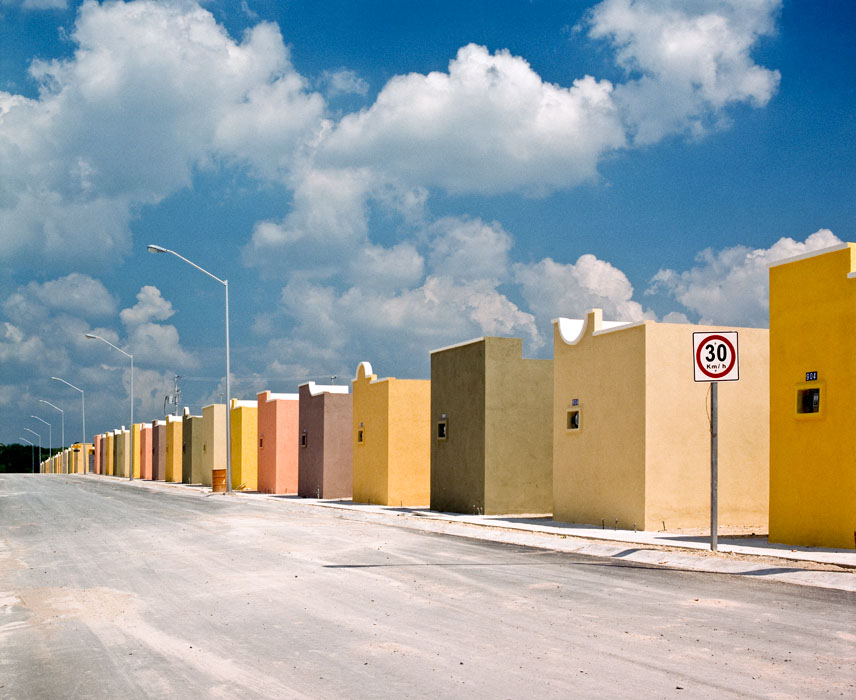 Did the museums who collect your work find you through the galleries or discover you directly?

Both. Some through portfolio reviews.

Some of you photo books you have published yourself, and some with the help of traditional publishers, correct? How do you decide which direction you will go regarding that?

Money! It has become a very expensive thing to work with traditional publishers that are doing a POD (pay on demand), and so sometimes a small run is the best way to go. The Car Poolers book will come out next year. I am funding the design out of my pocket with a design studio from Monterrey, and I just received a small grant to cover part of the production. 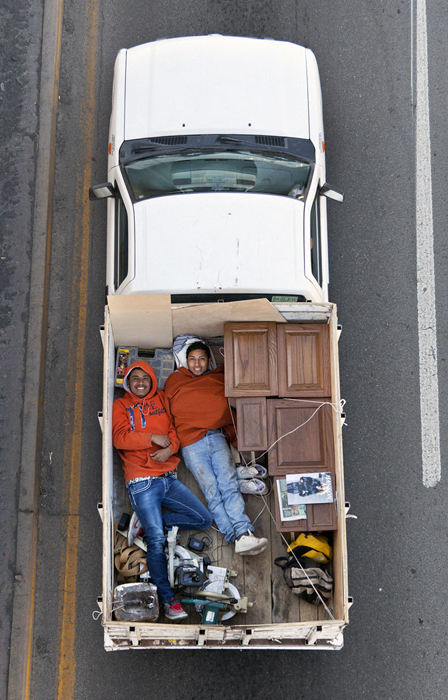 I will self-publish it and do some sort of donkey distribution where I can slowly get the book out there through presentations and my website. It´s a risk, but I am at a point where I want to try it and see what being your own publisher and distributor is like. It’s going to be a beautiful book with lots of goodies. I will start a pre-sale soon through my website, so stay tuned! 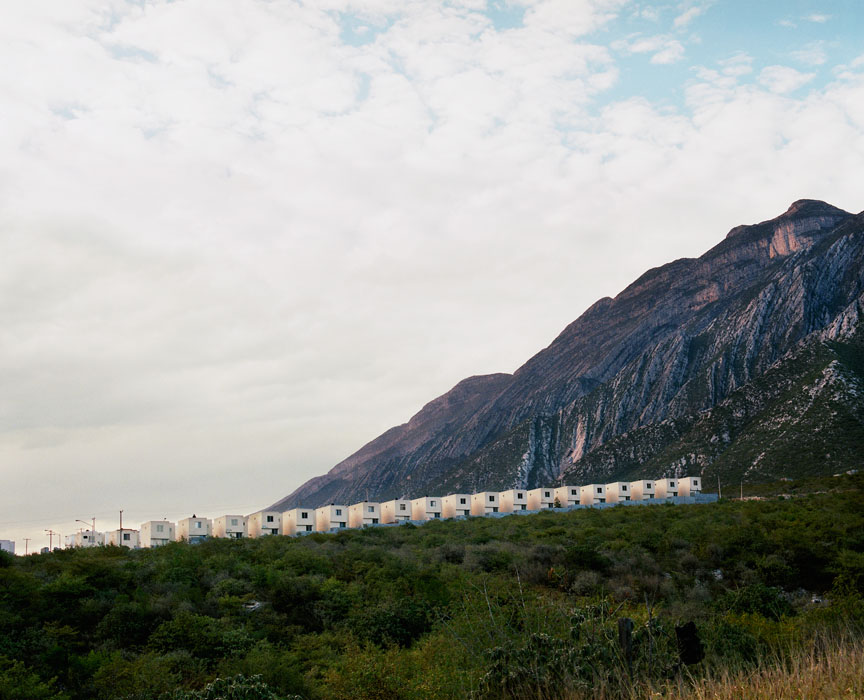 You were once a hospitality manager? How did photography come about?

I worked in hotels, restaurants and as a manager in McDonalds! But I was always interested in the arts. I studied leisure management and I worked on a bachelor degree in music, which I did not finish.  I wanted a change, and luckily photography came into play. I took several workshops which just blew my mind about what I could do with a photograph. I quit everything and started taking pictures. 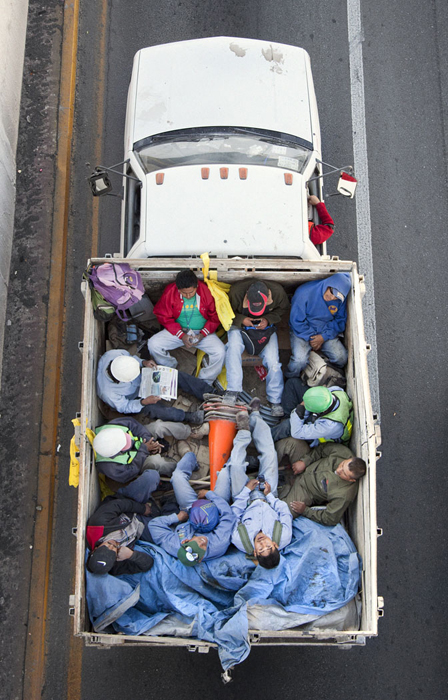 Do you miss your hospitality years at all?

Nope. It really is a stressful business. I did my first “project” at my last restaurant job. Maybe someday I´ll show those pictures.